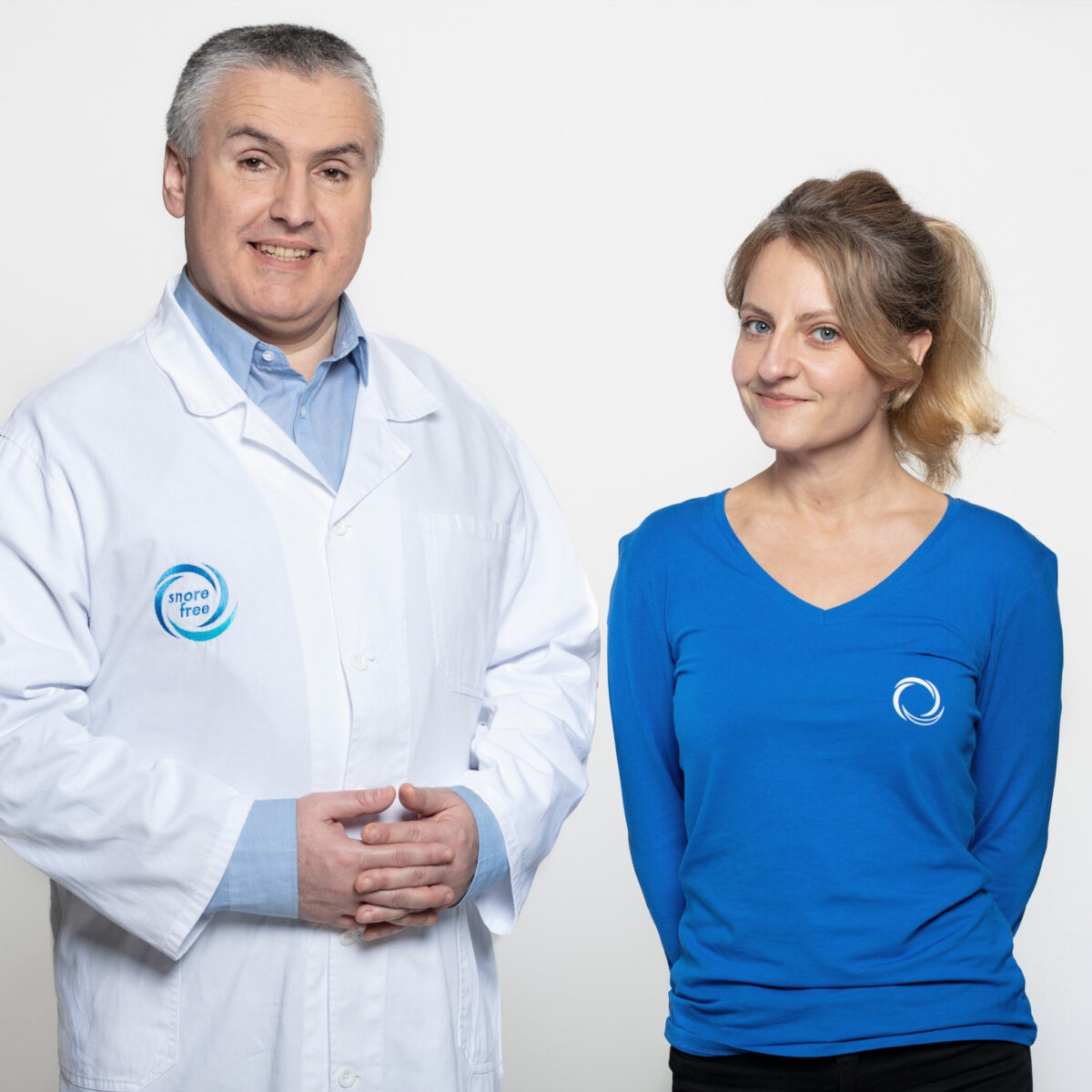 A logopedic therapist is a medical speech therapist. We handle all impediments involving speaking and language, communication and its deviations, as far as they concern the part related to organ function – this includes: false pronunciation due to incorrectly controlled mouth motor activity; muscular weakness of the speaking tools (lips, tongue, roof of the mouth) and the throat; stuttering; speech damage after a stroke or traumatic brain injury (accidents); but also voice problems and everything revolving around the larynx. And the larynx is also responsible for swallowing: speech therapists treat swallowing disorders.

Why swallowing disorders? What is there to treat? Anyone can swallow.

Normally, yes. But with neurological damage (for example, caused by stokes, head injuries or dementia), the swallowing function is often impaired. Due to a loss of nerve control and sensitivity, people cannot swallow correctly. Food particles get into the lungs where they do not belong (this often leads to pneumonia). The larynx is responsible for covering the windpipe and thus closing the airways when swallowing. This is its primary biological function; speaking and using the voice are only secondary functions. That is why we speech therapists are also trained and competent in swallowing therapy.

Where did you do your training? Where does one study speech therapy?

In my day, logopedic schools were affiliated with the respective clinics and state hospitals of the individual state capitals of Austria. My training center was the Academy for Medical Technical Professions at the AKH (General Hospital of the City of Vienna), which in turn was connected and assigned to the Ear Nose and Throat (ENT) Department of the University of Vienna Clinic. Later, the study of logopedics became a course of study at the corresponding technical college of the city – in Vienna it’s located in the 10th district (Favoriten). In Austria, the degree is standardized by the state and the course takes 3 years. Today, speech therapists graduate with a bachelor’s degree (which was not the case when I was a student).

What is the difference between a logopedic therapist and a logotherapist?

There’s a big difference! The logopedic therapist, as I already mentioned, is a clinical therapist for language, voice and swallowing. But logotherapy is a psychotherapy method (developed by Viktor Frankl). Both disciplines stem from the Greek term “logos”: meaning “word, speech” but also “sense”. So, while logopedic therapists deal with language and speaking, logotherapists are also involved in the (more general) meaning of the word “logos = sense (contents of a speech)”. Therefore, their entire method is based on and geared towards the psychological search for meaning (in life) for the human being. LOGOS has a very broad meaning in Greek – it also stands for “reason, thought, argument” from which the modern word “logic” is derived.

What does snoring and its treatment have to do with logopedic therapy?

Originally nothing. Until I showed up – with the plan – to introduce the symptoms of snoring and nighttime airway constriction into speech therapy, integrating these phenomena and winning them over to our discipline.

How did you come up with the idea of a treatment for snoring?

For me, it was a logical extension of the already existing therapies for other logopedic disorders such as swallowing impediments or voice problems. Because both occur in the throat and pharynx, and we speech therapists are specialized in this area. We are, so to speak, the physiotherapists for the throat. So it was only logical, for me, that snoring, which occurs in the throat and throat area, should and must become a domain for logopedics.

Who else is supposed to deal with this matter, if not us speech therapists? To this day, I’m still amazed that no one before me, in my branch, came up with the idea of taking a look at snoring and dealing with this area in more depth. But, for everything, there’s always a pioneer interested in initiating something new.

How do people come to you? How do they learn about your services, that is, your specialization?

That’s a good question. In the meantime, I’ve become fairly well known in the ENT scene – also nationwide, far beyond the Austrian borders, in Germany and Switzerland – with my special treatment for snoring. Many patients are sent to me by their local ENT doctors. Thank God, there are more and more specialists who are very positive about my alternative therapy for snoring and refer their patients to me. Then, of course, there are many people who find me via the Internet. I have a strong presence; my name appears in connection with my special qualifications on an international level as well. Many call from abroad and ask me about the long-distance treatment options, perhaps via online therapy (Skype, Zoom).

Admittedly, until recently, I was insufficiently informed or not proficient in using modern digital channels for my therapy – but this gap will now be bridged by our SnoreFree App! And then, of course, many people hear about me through word of mouth, are personally referred to me and recommended by former satisfied customers and clients. So, people already know me quite well worldwide.

How do you come up with the exercises? What’s important in the individual patient therapy?

First, I need to say: about 2/3 of my snoring exercises have already been a part of speech therapy – for example, in the treatment of swallowing disorders, pronunciation problems, and voice function. So, this includes everything that goes on in the throat area and around the larynx – I didn’t invent any of these exercises. I just took these already-existing exercises (from classic speech therapy methods) and applied them to people who snore or suffer from sleep apnea; you could say I diverted them for other purposes, “hacked” them, so to speak, in computer terminology. And there are, or were, additional special exercises that I created specifically to treat the symptoms of snoring.

This resulted in a standard program that I have been offering in my practice for over 12 years. In the concrete case of patients, I don’t treat people who snore or people who have sleep apnea or individual patients any differently when it comes to my choice of exercises; everyone gets everything from me – that is, all clients receive all the exercises for the task at hand. Differences only arise in the individual control of performing the exercises.

There are people with more physical skills and experience who, right from the start, can do my exercises better and faster, understand them more easily, while others need more time and guidance, supervision (in terms of physical techniques) and feedback – a stricter framework, a tighter corset – to learn and master the exercises. This is where I make distinctions in my individual treatment and proceed in a didactically targeted manner. Also, not every exercise in the program is equally easy for everyone, because there are differences between people; one exercise may be easier for one person, while another is easier for someone else.  And so, you have to focus, set priorities.

I always tell people – and here I have to make myself a bit “unpopular” – it’s important to do the exercises very often, to practice them in a specific way, to focus on those exercises you are not good at or less good at and that you don’t particularly enjoy, and not on those that are easy to do anyway and that you therefore like. Unfortunately, it’s just like with bodybuilding: it’s not about going easy on yourself.

This is what determines the personal, individualized differences in treatment and types of exercises.

Is sleep apnea often a topic in client interactions?

Yes, absolutely. Although the majority of my clients and patients are pure, i.e. acoustic, snorers. Even though there is a correlation between the degree and extent of snoring and the risk of additional breathing interruptions: the more I snore, the closer I am to having a sleep apnea syndrome, hence the higher risk of developing additional respiratory obstructions at some point.

But many people who already have sleep apnea come because of the burden of suffering with the medically prescribed sleeping mask, i.e. this respirator at night, which they do not tolerate well and therefore reject, boycott. Of course, they set their hopes entirely on alternative therapies like mine.

Can the exercises serve as prevention?

Yes, of course. Just like for the rest of the body, prophylactic action is always better than ironing out (mistakes) later. But in the specific case of the course of the exercises or the effort it takes, it makes no difference if you do my snoring exercises as a preventative measure, i.e. as general precautionary bodybuilding, or if you are already in an advanced stage of snoring or even have sleep apnea. This kind of training can be useful for both groups of people – it practically NEVER hurts to do it! There are no (negative) side effects.

Those who are still not entrenched snorers, i.e. if their oral zones (mouth-throat-pharynx) have not been neglected to a great extent over the years, will probably reach the target, and the success of the workout, faster – be able to do the exercises better and more easily. Just like someone who is still young, slim and fresh needs less time to get into good shape than an older person who is already overweight, has not exercised physically for many years and has lost significant muscle mass.

Therefore, the following always applies: Prevention is better than cure.

Should one try this kind of training to cure snoring first, before turning to further more invasive therapy options such as operations?

Of course. Especially with chronic disorders where there is no acute danger in delay, where it is not necessary to act quickly and rashly, I believe the course of treatment should always have a gradual, an escalating scope, i.e. start with the smallest, most harmless therapy option with the fewest side effects – before going on to more severe, more massive interventions if the hoped-for success has not been achieved.

Because if the exercises do not help – which is practically never the case, because doing the exercises always helps everyone as general observation and experience tells us – then you can still decide to take more radical measures. They remain open to you.

But once you have been operated – because that which is cut away is gone and can no longer grow back (at least in the ENT area) – and if things don’t turn out well, you can never fix this damage, cannot undo it, it is there to stay. To say nothing of the other surgical risks of anesthesia, thrombosis, or infection (with multi-resistant germs). So, you should always start small, slowly, and then gradually work your way up – if necessary. Don’t bring in the heavy artillery right away. This is just common sense, I think.

Do you want to know more, or do you have specific questions for Dario Lindes in his capacity as a speech therapist? Just send your questions to office@snorefree.com.

Everyone knows someone who snores